We spent a small amount of our hard-earned 'extra' money (read: from chopping Dan's hair off) on a photo backdrop that we can use as a stage piece for our outreach, as a super-authentic vignette for our team pictures, and as a general morale booster in these weeks of frustrating testing: 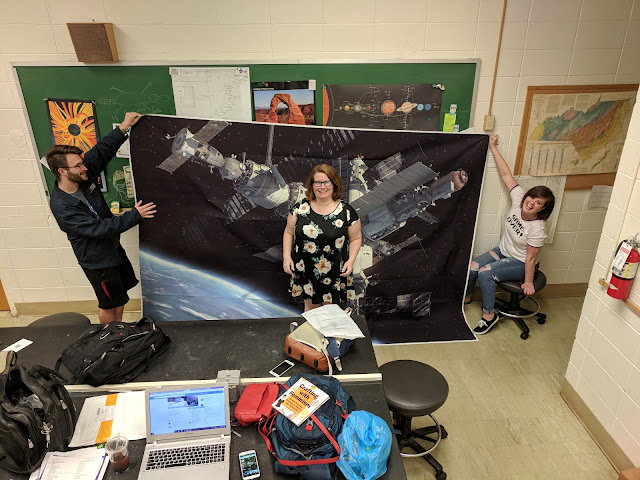 (Viewers should not be alarmed by the lack of EVA suits on our team; Julie has been properly trained and equipped, and is safe from both depressurization, hypoxia, and cosmic rays.)

SUBLIMINAL MESSAGE: EVERYONE COME TO OUR FUNDRAISER THIS SATURDAY 24 FEB. ALL YOU HAVE TO DO IS BUY BEER AND THEN DRINK IT.

We isolated the issue with our first servo test (we're convinced that we were just asking too much, mechanically, of our servos) and have Ol' Foamy ticking happily along, as you can see in the video below: 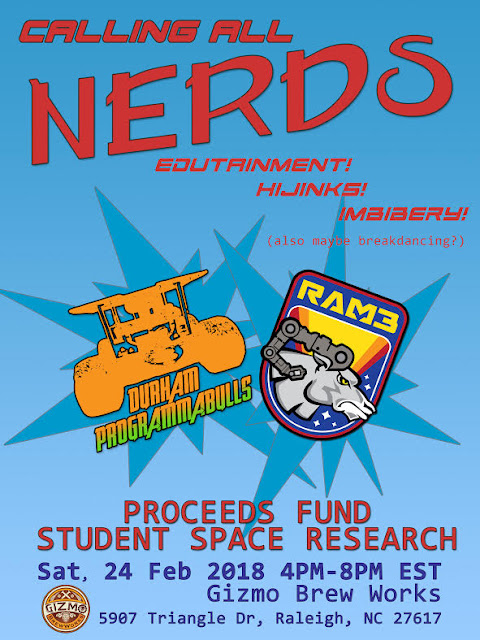 Generally speaking, testing days are some of the least fun and most necessary parts of the work. It's never as quick as one hopes, often fraught with nested, independent hurdles, and any progress we do make seems vastly disproportionate, in the bad way, relative to the effort required.

Ol' Foamy's job is to hold everything in place while we test two of our servos. We installed a wooden arm on each, to which weights can be attached so we can get a baseline idea of how they perform in vacuum while under load. Note the successive layers of tape; this is rapid prototyping at its finest. Handsome Dan did a great job whipping together the original test stand in an hour, and we've been improving on it every test day.

Keeping in mind that this is essential to the project's success is sometimes difficult. We occasionally take breaks, though, to shore up morale. Today we rested our eyes a bit; we've been selecting googley eyes that are right for "Ol' Foamy", our test stand, so that its constant shaking and gyrations will be more amusing. (I forgot to take pictures of the end result, but will post them later.)

Here are a couple photos from today's break. I decided not to try it as a selfie for reasons that may be apparent: 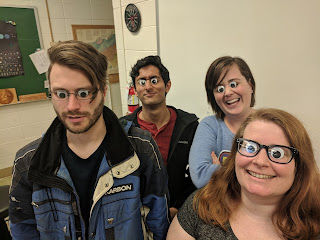 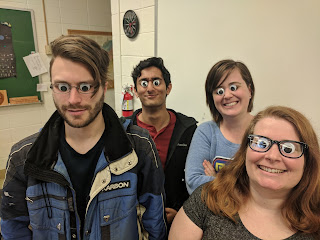 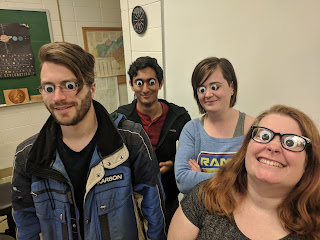 Posted by Unknown at 5:41 PM No comments:

Soham cut off Dan's much beloved man bun today. More on this story in a bit!
Posted by Julie at 3:29 PM No comments:

Yesterday was a big day for the Disco Beckies because they had their first PDR for the HAB project. 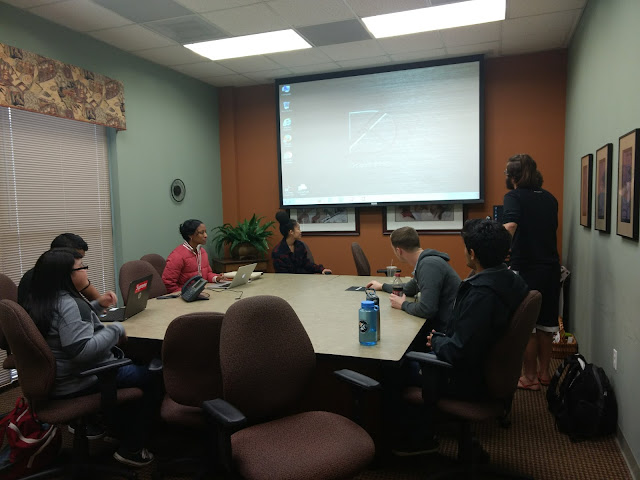 They'd been working on getting things up and running and feeling pretty good about their prototyping and design, but still, the PDR is always the true test. 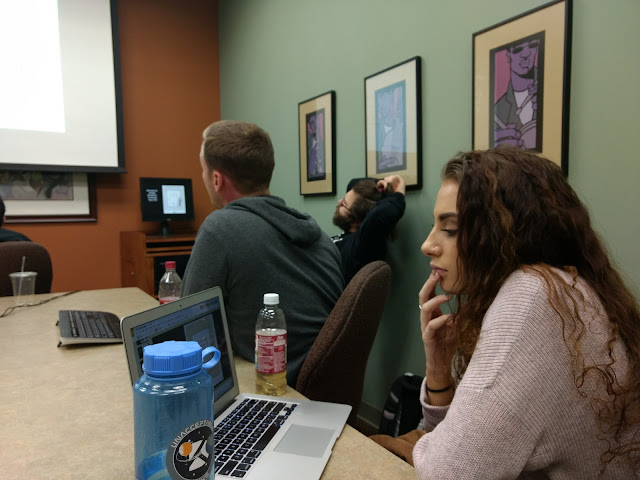 Things were pretty tense during the teleconference but Dan, Seth, Kevin and Oliver did a great job when it was their turn to speak. 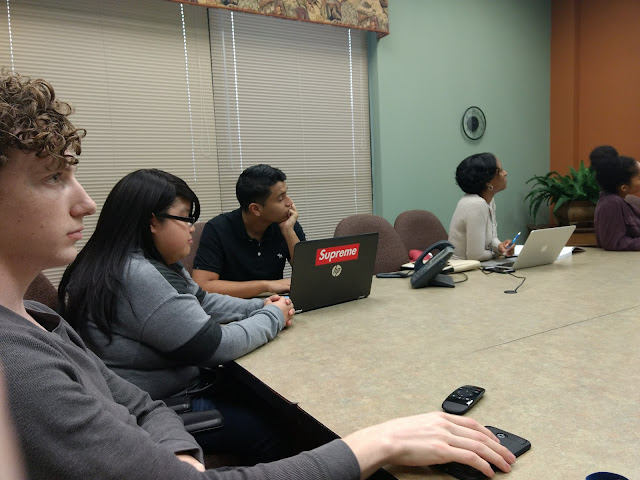 The judge liked our designs and offered some feedback to help us improve our power management and water resistance. 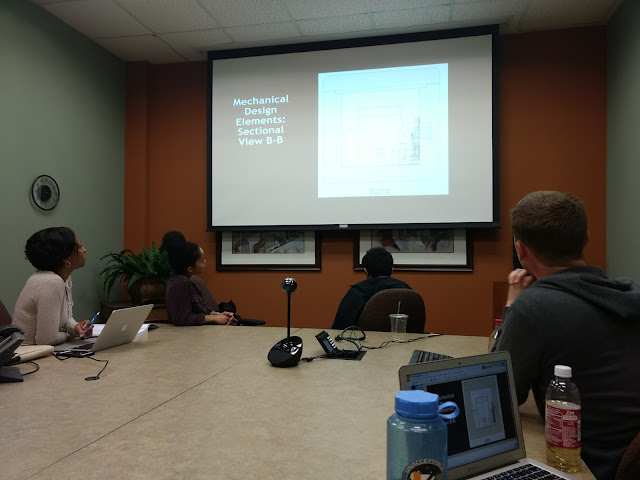 Everyone was giddy with excitement when it was over and Seth and Oliver took the opportunity to give an impromptu hull bongo performance. 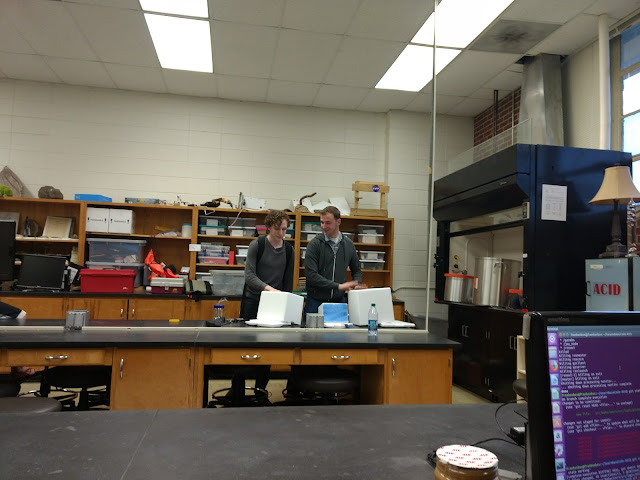 Oliver got his shirt in the mail! It's incredible! 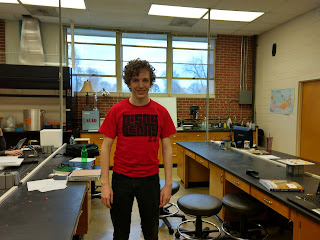 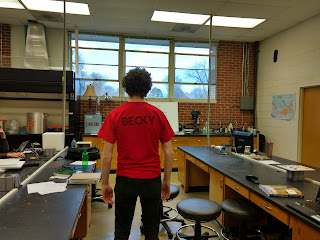 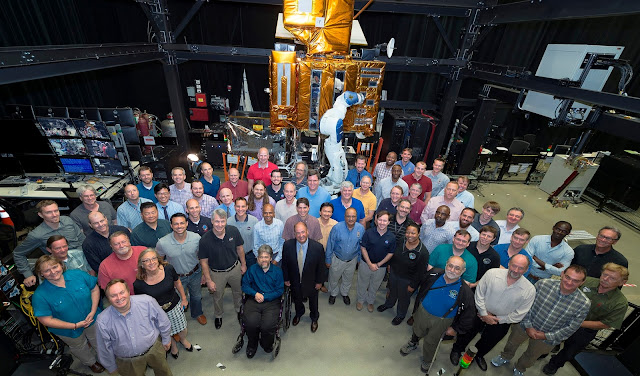 Last Tuesday, Julie, Jimmy, Dan D., and I attended a meeting at Goddard where members of the Satellite Servicing Projects Division met with industry partners to discuss private sector uses for their technology. There's not a whole lot we can tell you about what we learned, but I can say that yet again everyone at NASA was wonderful, welcoming, and incredibly helpful and that we gathered some information that will be  useful as we start testing our robot arm and refining the design. We even got to have lunch with Zakiya, who gave us the tour of SSPD in December, and peppered her with questions about interning and why not to use certain types of grippers on our arm.

During our time there, I was able to sit down with Peter Sooy, the Education and Public Outreach Coordinator for SSPD. He was generous enough to let me interview him about life at NASA and to provide some advice for people who want to join the agency. 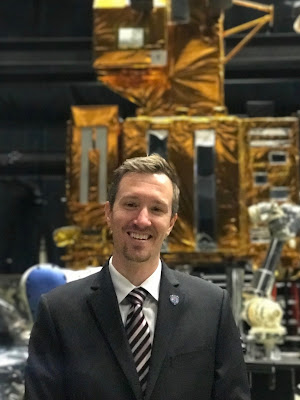 What is your position with NASA and what does it entail?
My official title is Education and Public Outreach Lead for the Satellite Servicing Projects Division. So what does that entail? Interacting with student groups, so that’s the education part. I give tours to students of all levels of our robotics operation center. I just counted up- in 2017, we had 239 tours that we gave to 3,002 people. And I don’t know how many I gave, but I probably gave 50 in a year and all the other ones I coordinate. I do all the scheduling and coordinating tour leaders, so that’s the education part.
The public outreach part is going to events and running a booth or exhibitions. We go to, like, three to six events a year. They're either local, like in DC, or national. We’ve been to SXSW, we’ve traveled to other places. We run a booth and I coordinate the volunteers then ship everything out and run the booth. It’s a way to promote our office, to promote satellite servicing, and if along the way we meet a young engineer and they say, “You know, I love this and I love you guys!” we always say, “Yes, please!” I give out my card and if they're willing to travel to DC we try to accommodate student groups as much as we can.

What is your educational background?
I have a Bachelor’s degree in Journalism from University of Maryland just down the road. I graduated in 2009.

What are your favorite parts of your job?
I’d have to say the pace of it, being able to be at an event like this today where I can talk to a bunch of professionals from industry and then the next day give a tour to a bunch of 8-year-olds.  It’s just having a lot of different things to do and its exciting, fast paced, and different. It’s not the same task everyday so it doesn’t get boring.

What are some perks of working at NASA that we might not know about?
There are perks! In addition to going to events, which are very cool, sometimes you get to see exhibits or famous people. Going to launches, I’ve only been to one, but it was really cool. That was a really cool perk. Last year we had a project go up to space station that launched from Kennedy. It was a SpaceX launch from Pad 39A, which is where Buzz Aldrin went to the moon. They brought him to the launch and I got to meet him which was an additional perk. When I started working here, I never thought I’d get to meet Buzz Aldrin, so that’s an easy perk to pick out.

What are some challenges you face at work?
Staying focused and keeping a broad vision, not getting tunnel vision on one event for one day and keeping everything moving with a lot of different tasks going on at once. Sometimes that can be problematic for me, where I focus on one task and then something that I’m not focusing on can have the ball dropped. So staying on track and organized and aware.

What surprised you most about working at NASA?
I don’t know about for all of NASA, but definitely for this division it’s the people. I expected, even as a kid, the people at NASA would be smart, but I’ve worked in other industries with smart people but they haven’t been nice to work with, they were difficult and mean and rude. The people here are very nice. So in addition to being highly intelligent they’re nice to work with and I’ve really run into few people that are hard to work with which is rare.

What is the most expensive thing you’ve touched?
Um…to be honest they don’t let me touch a lot of things, I’m not an engineer. But we have some expensive stuff in our robotics facility that needs to be covered up to be photo safe, so nothing sensitive is showing. The other week I did go in and cover up out robotic arm, our cutting-edge robotic arm, under supervision of our engineer. I wore my little gown and wrist strap and I covered it with safety bags. I didn’t get to touch it, but it does cost upwards of $5 million so…that was expensive!

What advice do you have for students that want to join NASA?
I get asked that a lot, so I always tell kids to pursue what you enjoy. If that’s engineering, that’s great. Truthfully, most people who work at NASA are engineers. But if it’s your dream to work here and you’re not an engineer, just keep trying. This is a big agency there’s almost 100,000 people at all of NASA so to keep all that working you need more than engineers, you need business people, you need communications people, you need human resources people. I always tell people to keep trying, to not give up on their dreams. If you really want to work here, you can in some capacity. So you may not be the one touching the hardware but you might be the one helping write the contract for publicizing the hardware. It takes a village to make this all work.

Which NASA center is the best?
Oh man! I think Goddard is. For work-life balance, I’d say Goddard is. I’m an East Coast person, I’m local to the area so I like being near D.C. but being out here with all the green space is kind of like Mayberry, very nice.
If you’re going for mission and all that …I’ve been down to Kennedy and I did like Kennedy. It’s in the middle of nowhere in Florida. For a day trip? I’d say Kennedy, that was nice. I’ve been to JPL, LA is hard to beat but I like Goddard.

Thanks, Peter, for letting me pick your brain and thanks SSPD for having us. We hope to see you again soon!