In about a week we'll be getting on a plane bound for Houston, Texas with the ultimate destination of the Columbia Scientific Ballooning Facility in Palestine, Texas for integration. If you weren't following us for integration last year it is a very stressful week where we make sure that the payload that we have been building will meet all of the requirements for HASP,  won't blow the HASP fuse, and that it will survive the heat, cold, and low pressure of space.

Last week we had what we call Minintegration. This is where we run through all of the testing that we will encounter at real integration. Last year we went to NASA Goddard  for mini. This year we went to Langley! When we toured LaRC way back in December we noticed that they had thermal vacuum chambers and asked (the lovely and brilliant) Kristyn Damadeo if they ever let student groups visit and use them. She promised to look into it for us and connected us with Mark Thornblom. A few conference calls later and we had a spot testing our payload in a real testing facility at NASA.

Of course, anything beyond our glorified tamale pot/incubator testing rig is a lot of pressure (metaphorically...literally the point is that it's NOT a lot of pressure) so we wanted to make sure we put our best foot forward. We've been working at DSBF and DCSBF to get everything up to flight ready.

The Charm, Smooth and I drove up to Virginia on Sunday. We were waiting around at our terrible hotel for Jimmy to bring the payload. Memes and Jimmy were just adding some finishing touches when an essential component shorted out.  Everyone scrambled to find a quick replacement but the types of things we need aren't sold at Target and it was difficult to find anything available that would get to us in time. Jimmy's family was pressed into service to source parts in neighboring cities. This delay lead to more delays and soon it was evening. After a quick leadership chat we decided that it made more sense for us to meet halfway between Hampton and Greenbelt to trade off the payload so I found a Sheetz that was open 24/7 and we made a plan to drive to the middle of nowhere at 11 pm. We hopped back into the car at 9 pm and arrived at the Sheetz ahead of schedule, texted DCSBF to see what they had as an ETA...and...they hadn't left yet.

Many, many, many polite, delicate, professional, and lady-like words later...we were back on the road...to Maryland. We arrived at DCSBF at about 12:44 AM. 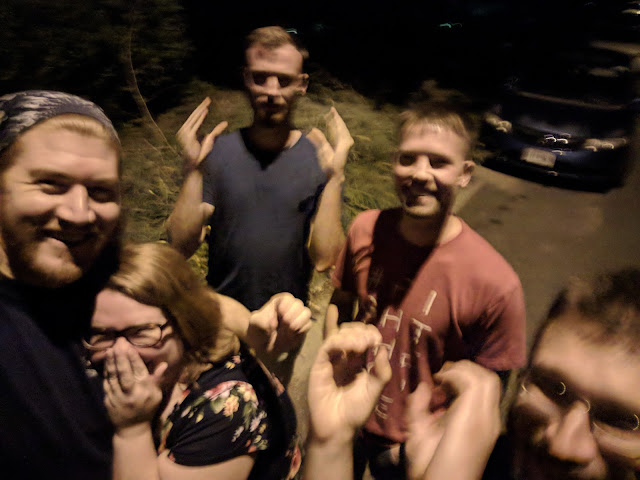 In spite of the late hour, or perhaps because of how loopy we all were, we were still jubilant to be reunited with our teammates. After some quick instructions and a flurry of tetris style packing we were back in the car for the 3.5 hour drive back to Virginia. We got back around 4 AM, fell into bed, and then got up bright and early to meet Mark and test RAM!

But then...somehow...we got lost twice on the way to Langley and ended up being late.

All of these delays paid off because we expelled all of our bad luck at the beginning of the week. From that point on it was smooth sailing.

Seth got promoted to Integration Team Lead with only a short amount of time to prepare. He was anxious about the prospect of being in charge of the project since he came on board late but he rose to the challenge. He spent most of the downtime on this trip reviewing videos, sifting for tasks, and listening to the dulcet tones of Space Viking. 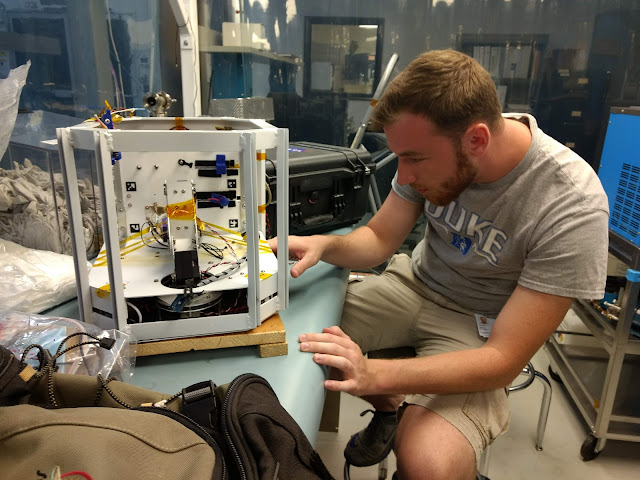 Meanwhile, Smooth jumped in and took over the assembly. We had a few tiny tweaks to make to RAM before we could pop it in the chamber. 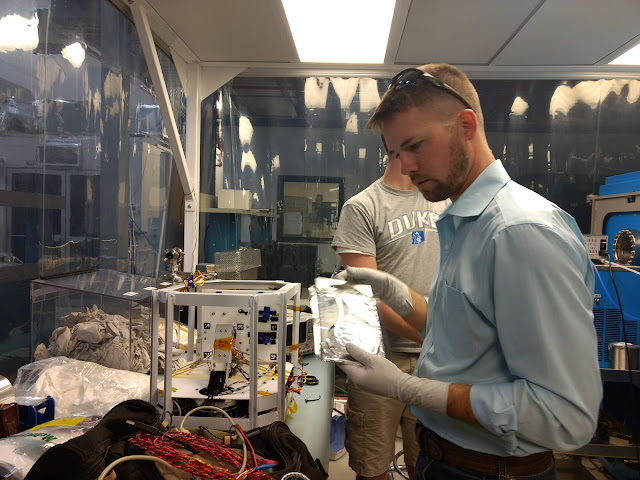 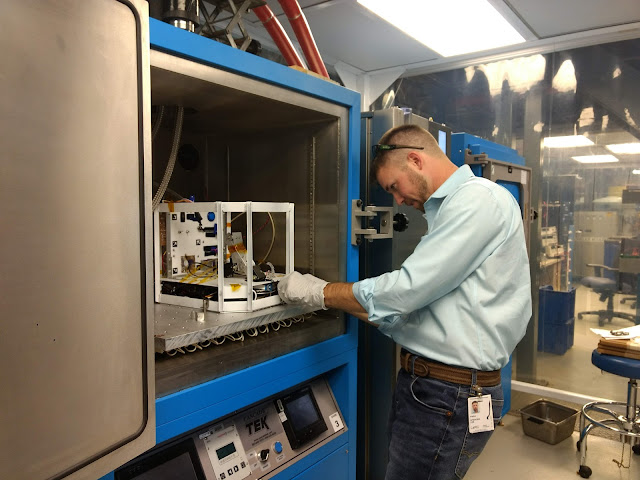 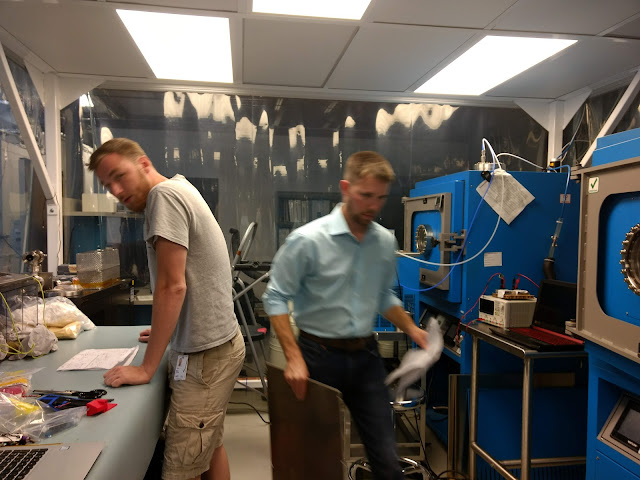 Mark Thornblom was a fantastic host and made us feel right at home in his testing facility. He helped us unload, gave us a safety briefing, and then basically remained at our beck and call for the rest of our time there. Everyone we met was incredible and so many people came by because they were excited to meet RAM. 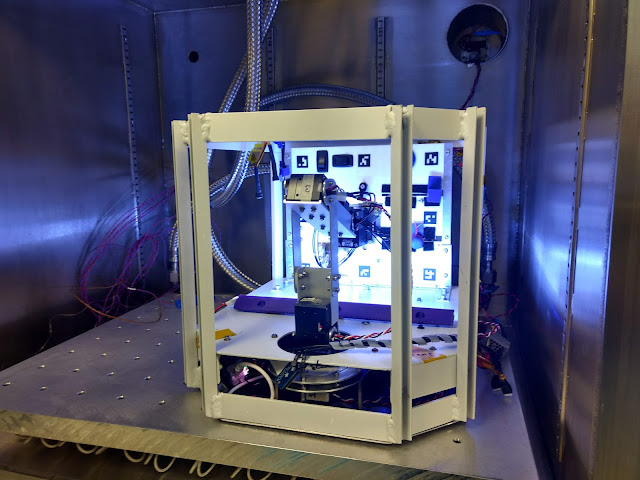 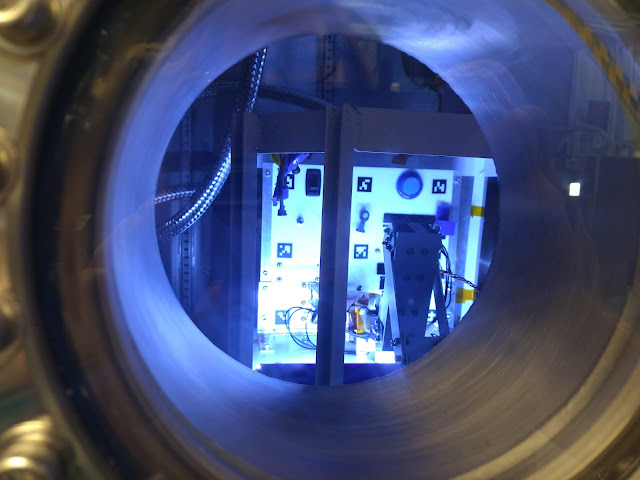 The serious overtime that Dan and Jimmy put in was worth it because RAM did everything it was supposed to do, perfectly, on the first try. They made us look good! After we got everything ready for the test we adjourned for the day and headed to our new luxurious hotel , took naps, waited for Jim Mike, and then ate at an all you can eat sushi place for dinner. 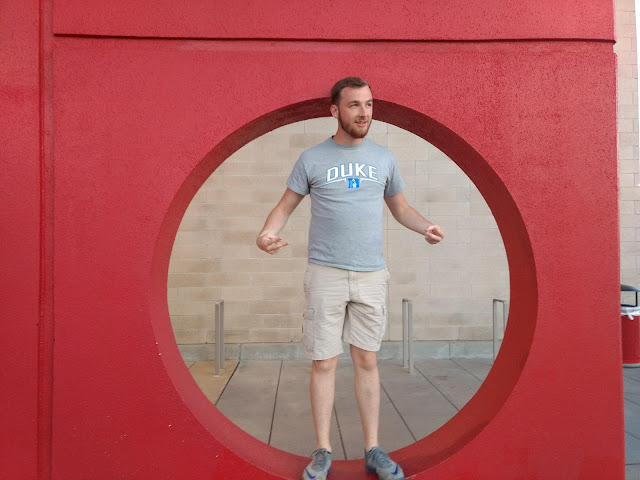 After a gloriously restorative night of sleep in huge, fluffy beds we went back to LaRC and started our first round of thermal vac testing with a bake at 55 degree Celsius. RAM had a test cycle to run through that needed to be re-started every once in a while but mainly we spent the day watching, waiting, and hoping everything continued to work. 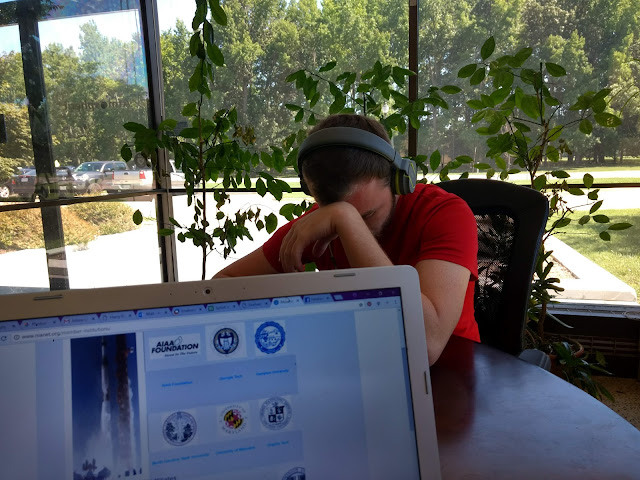 We had lunch in the cafeteria and the guys discovered the Black Hole. This abomination of a sandwich is composed of a hamburger patty, topped with chicken tenders, and covered in BBQ. 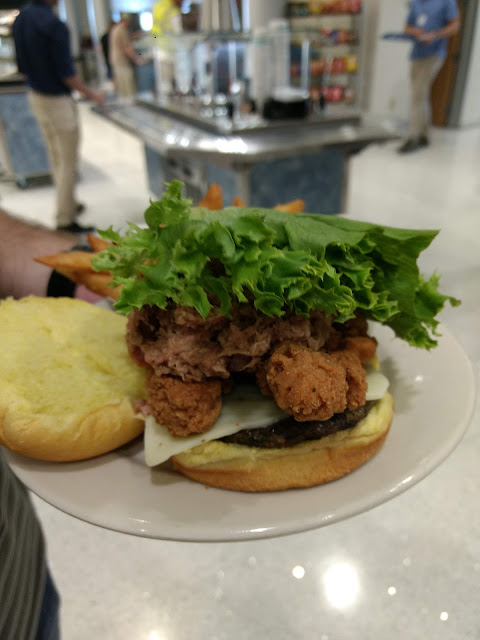 I suggested that they add another layer of sweet potato tater tots...because why not. 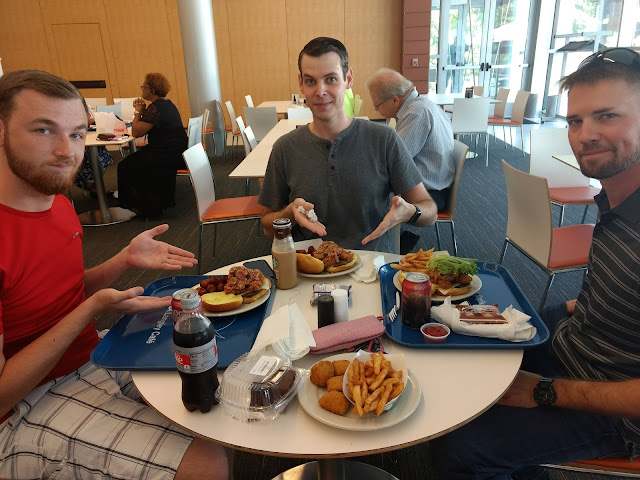 The afternoon passed as you might expect. I had another engagement at the National Institute of Aerospace but the rest of the testing in the afternoon was blessedly free of incident. The guys even got to see the ISS downlink. 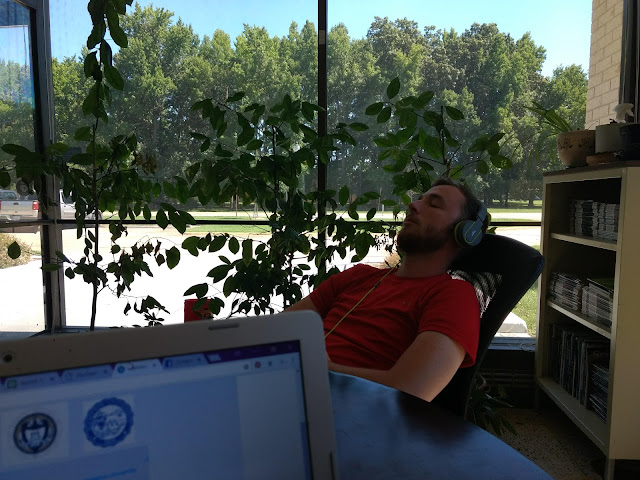 With a successful day of testing cleared we decided to treat ourselves to a fancy dinner at the Deadrise and a relaxing evening exploring the waterfront. Hampton, VA is gorgeous! None of these photos are edited. 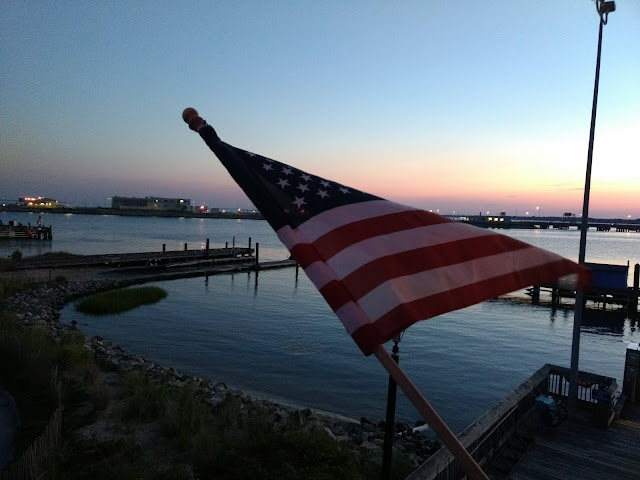 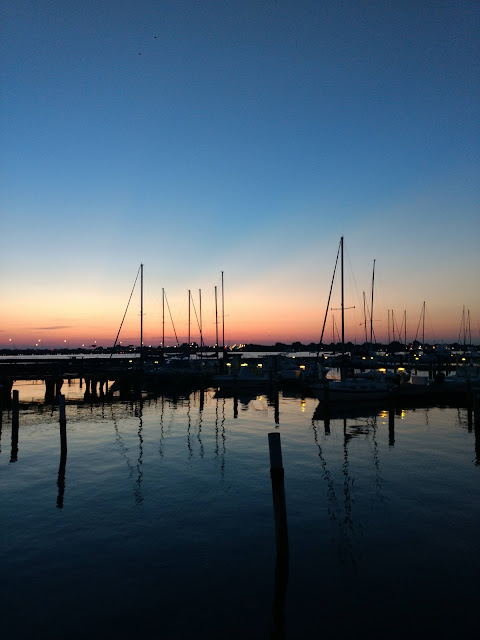 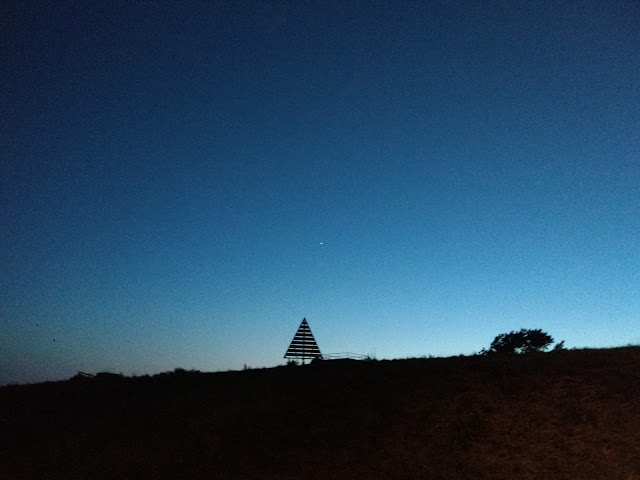 Wednesday we were back at it, this time we were chilling the payload down to to -55 C. 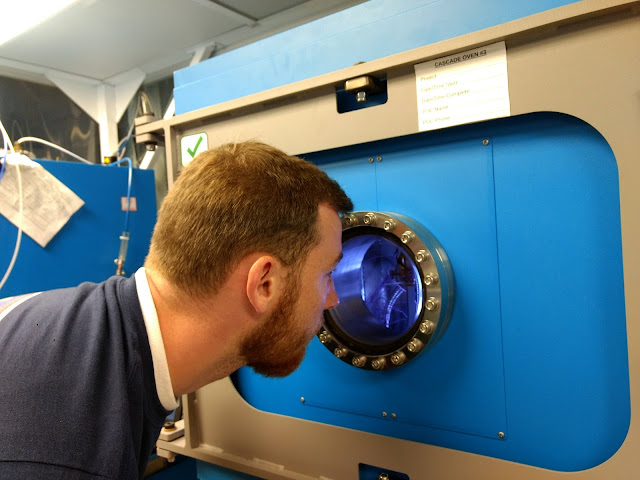 Seth had a light lunch to make up for everything he ate the day before. 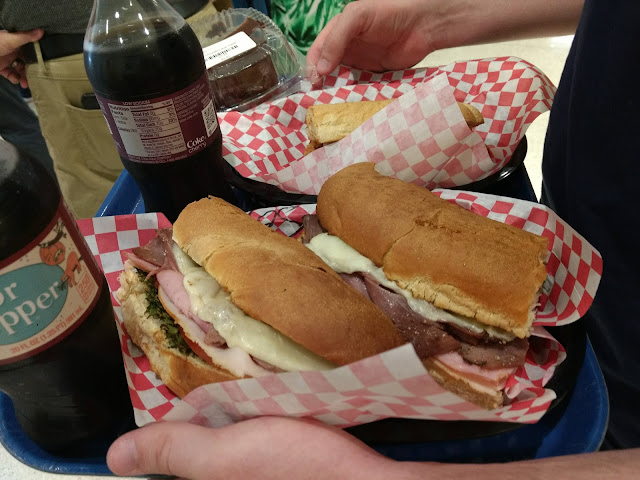 We took a tour of a few testing facilities that I couldn't photograph and even more people came by to visit RAM. 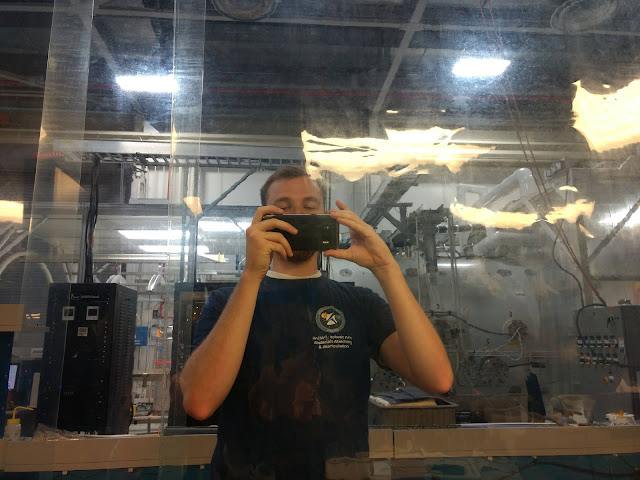 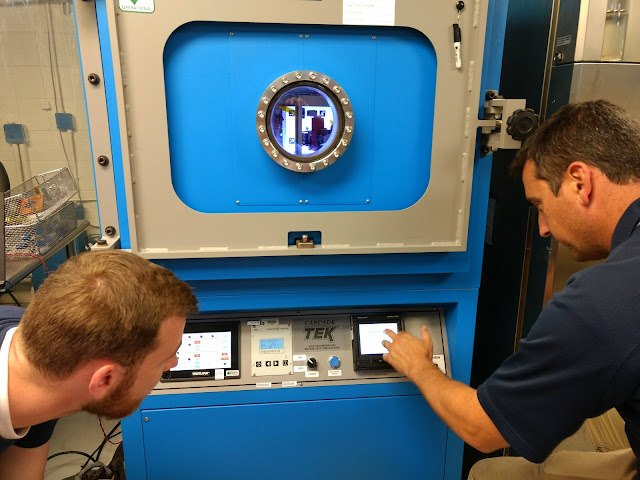 Here's a graph that shows all of the paces that we put RAM through over the week. 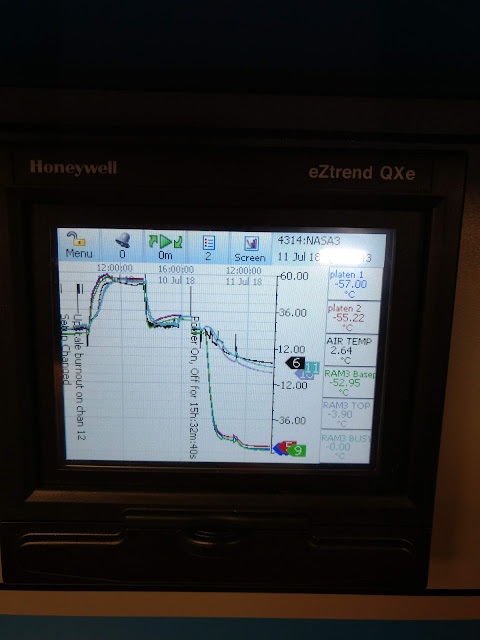 Seth and Spencer had an opportunity to help Mark by designing a bracket for the testing chamber. 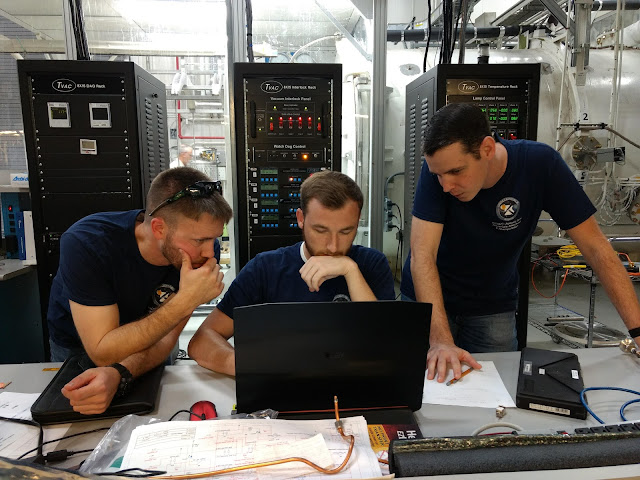 We passed cryo with no issues, so then it was time for our nemesis, oscilloscope testing!! We let the payload come back up to ambient conditions, ran a quick open door test, and then hauled it all out of the chamber. Jim Mike had been training for this moment for a month. 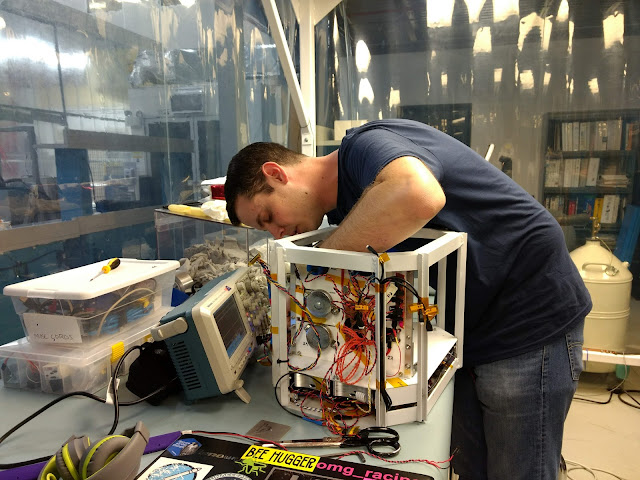 We had one mysterious issue where the arm went limp and power dropped suddenly that James thinks might be related to the strong magnet on his watch band. Other than that the readings were quiet....too quiet.

Jim Mike did a great job on the oscilloscope considering he was basically under a microscope while he was working. The PR interns came to visit during this period and took a bunch of glamour shots of RAM. 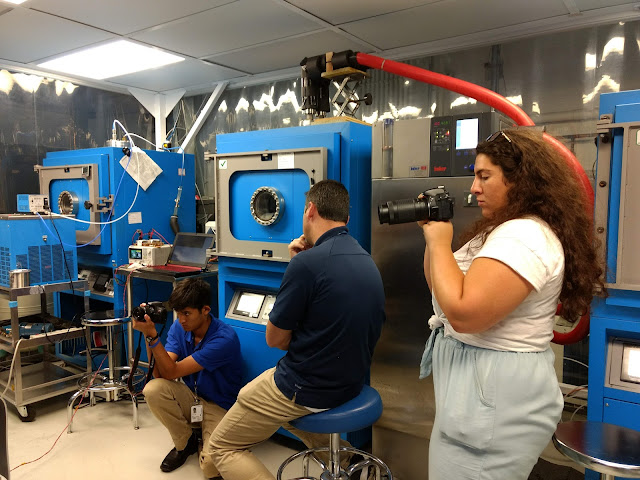 When testing was over we said tearful goodbyes to Mark and his team. We are so thankful to have this opportunity to test because it means that we are in a much better position to go into Integration with confidence. We were told that we got lucky that our timing coincided so well with a period where Mark needed to do some testing of the chamber but we know that all of the credit goes to Mark for scrambling to find a creative way to make this happen for us. Testing is challenging at a small community college where we don't have access to facilities and we can't afford to pay to have our payloads tested. Stakes are also higher for us because what money we do have to spend on projects is very carefully doled out, and finding payload errors at the last minute could tank our whole mission!

The guys went South to NC and I headed North back to Maryland to bring RAM back to Memes and SV. They had scheduled a time to have some EE interns visit and do some more scope testing, just to see if we could really find any issues, and all was quiet on the Western front once again. 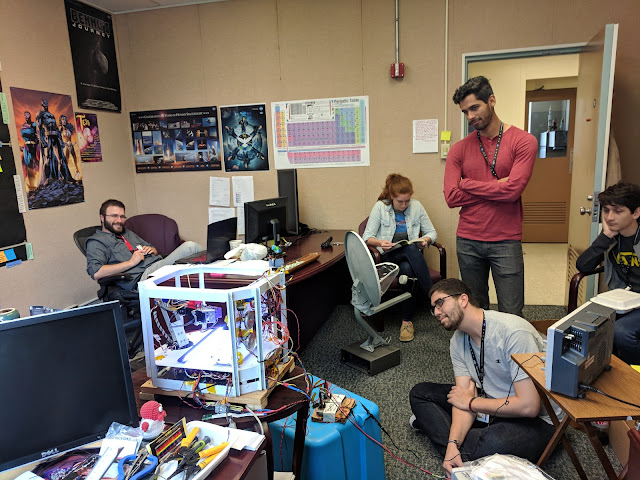 I was also pleased because I got to see Jimmy give his laser activity presentation to a live audience and visit with his wee-tiny-baby sister.
(And astronaut Ricky Arnold.) 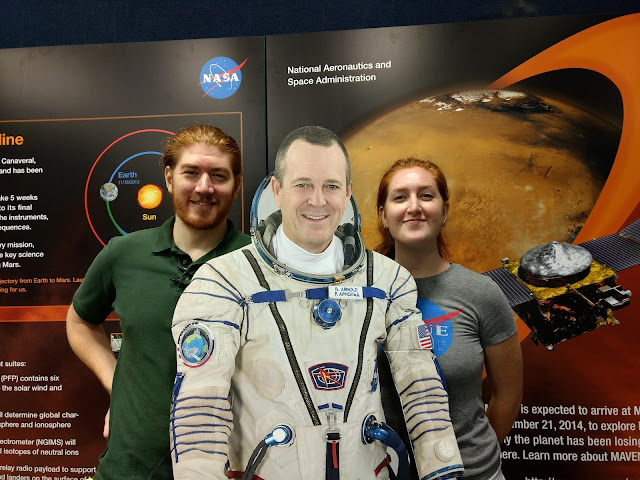 So now we're back at DSBF printing everything in kynar while the DCSBF team clocks in for more late nights to get everything perfected for Integration!
Posted by Julie at 1:26 PM