On the Subject of Signs and Obedience

The internet imploded over our current administration's visit to KSC, which, really, wasn't as bad as it seemed. Even so, there are any number of reasons which make the picture fun to whicker about, not the least of which were debates about the residue-leaving properties of beloved Kapton tape.

Anyway, we made the following attempt to lure one of our electrical engineers to join some of the team at Goddard: 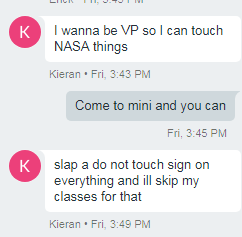 Mini-integration is our dress-rehearsal-dress-rehearsal, so we're understandably excited about it. As part of the prep, my mentor Paul Mirel (who does cool things) has been helping me prepare a vacuum oven so that we can put GOAT in extreme low pressure and bake it for a while to see how she behaves. The team in Durham has been doing this for a while with our inexpensive gear, but we're going to try with some better equipment.
This has involved modifying some hermetic connectors so that we can poke wires into a thing that's in high vacuum and getting a better way to measure temperature inside. (This vacuum oven, while frighteningly unprepossessing about and proficient at both keeping air out of itself and staying quite warm, doesn't have an integrated thermometer; you have to shine a flashlight through the 0.5" thick glass window and peer inside to read the analog thermometer, which looks like something I'd stick in a Cornish hen to determine how likely it was to kill me with salmonella. But I digress.) 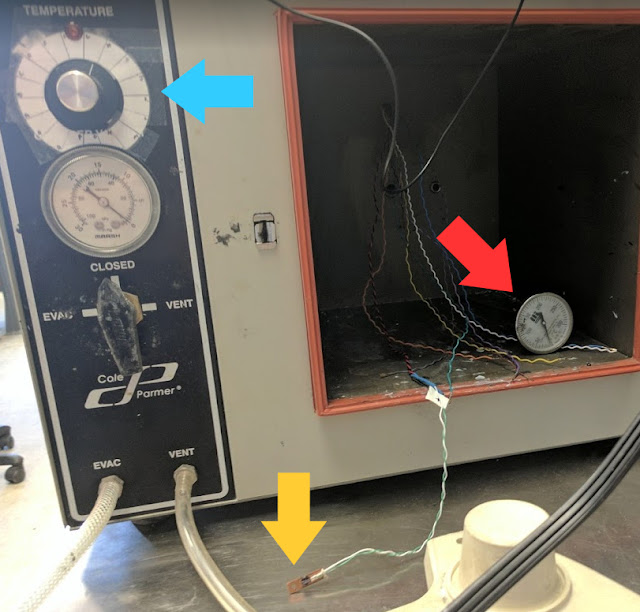 The red arrow shows the clashingly low-tech temperature device that comes with the oven.
The orange (copper?) arrow points to an AD590, which is a nifty little integrated circuit that helps us tell temperature in a manner more in keeping with the 21st century, which is to say that it uses magic. Some of this magic involves gluing it to a bit of thermally conductive metal (copper) with some magic glue that does a really good job of taking heat in the exact same way as the metal it's glued to, so it doesn't pop off it if gets super hot or super cold. The AD590 needs to be wired up to some other bits to give you this information (it's dreadfully coy), which I'll get to shortly.
The blue arrow points to the temperature knob, which, in another baffling combination of incredibly-high-tech and incredibly-low-tech tools rubbing shoulders with one another1, is surrounded by a hand-drawn paper ring Scotch-taped to the back of the dial so they could try and write down what temperature the oven would reach if they pointed the dial to that bit of it.
The Green Arrow is, as far as I can tell, a somewhat silly superhero who fights crime with archery. Sorry, DC.

Anyway, I rigged this up in a bit of a rush on Friday. The AD590 is connected to some wires, which go through the hermetic connector sticking out the back, which snakes through a cable, which I've alligator-clipped to my breadboard and thence to an ammeter, and gets power through the box-with-many-round-holes-in-it that is sitting on top of the larger grey oven bake-y suck-y box. The team gets here tomorrow. We'll see if my bait tantalizes Kieran enough: 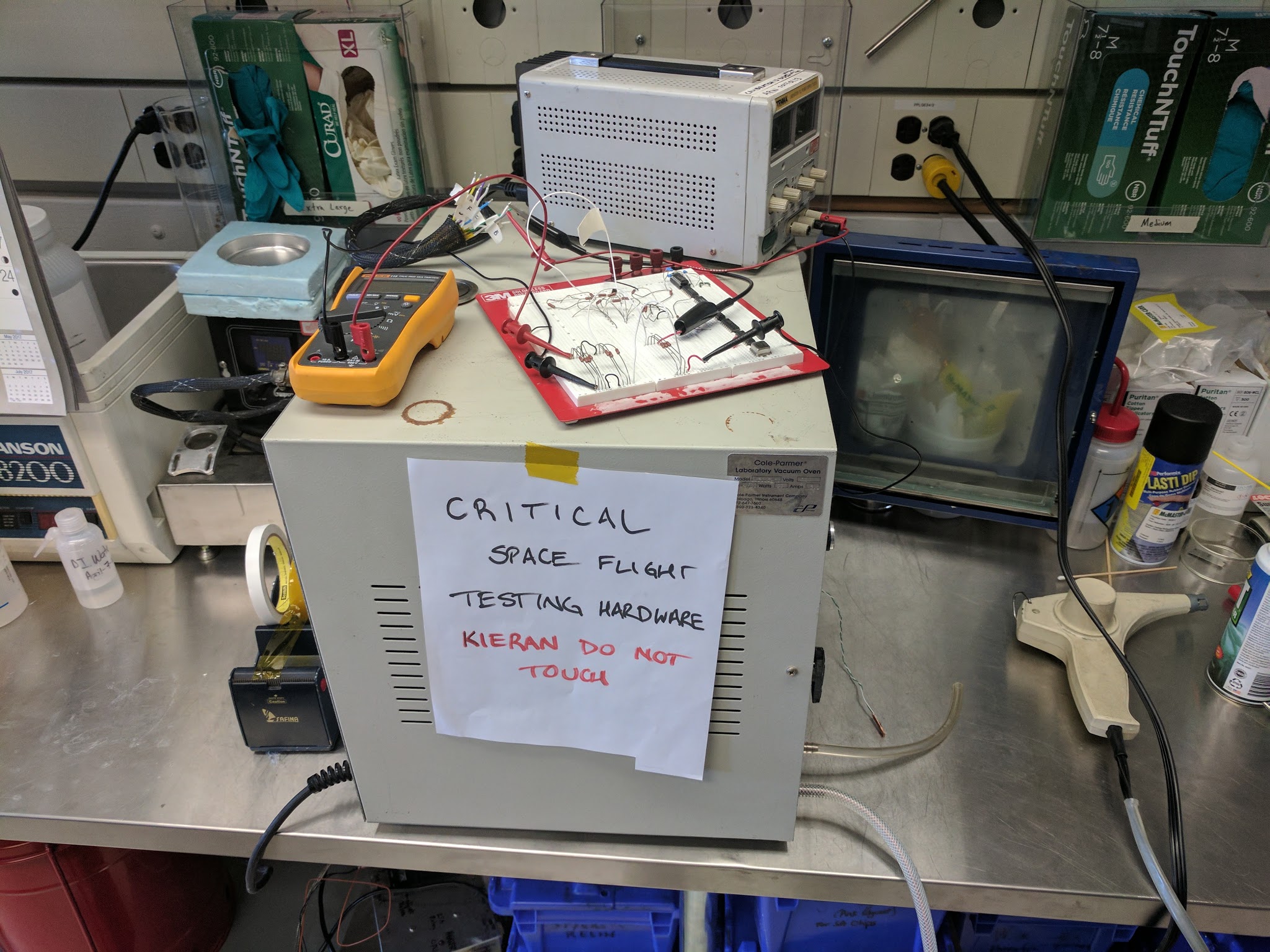 Also, I made a 1 kΩ resistor out of ten 10 kΩ resistors (most of PIPER's gear is in the field and we're having to improvise a fair bit) and I was right pleased with myself. I did this by using PHYSICS, which is another kind of magic.

Please come, Kieran. There are so many things you oughtn't touch.


1 (maybe later I'll tell you about the rocket fairing deployment test where they were dropping multi-million-dollar spaceflight hardware onto literal piles of old mattresses and foam)↩
Posted by Unknown at 2:08 PM