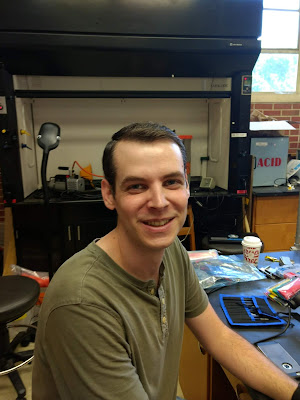 One day, early this summer, James Cowell meandered into DSBF to consult Julie about his academics and it was at that moment she decided he would be an asset to the team. Since being invited to join the Unacceptable Risks, James has been spending much of his free time in the lab acting as a jack-of-all trades, he describes himself as a 'helpful grunt', stepping in and completing any task that may pop up. When asked what the biggest challenge is that he's faced, he said he's had to spend a lot of extra time reading up on the project and looking at specs to make sure he's as knowledgeable as possible.

James is currently pursuing an Associate's of Science at DTCC and plans on transferring to a 4-year school to study computer science with a focus on data science. When he's not helping to build robotic arms or send things to space, he spends a lot of time reading. He jokes, "If I didn't have a monthly book budget I'd probably be broke living in a cardboard box somewhere." And if that isn't enough, he also keeps himself occupied with his side-gig as a handyman.
Posted by Unknown at 9:01 PM