I don't think I've mentioned on here that our team meets every Sunday from 3-6 (later if we're doing drops....much, much, later if a big presentation is on the docket) and has a Google Hangout Video Call every Wednesday from 9-10 pm. These standing meetings are mixed in with builds, drops, foxhunting and other terms that make sense to us and have become part of our team vocab. 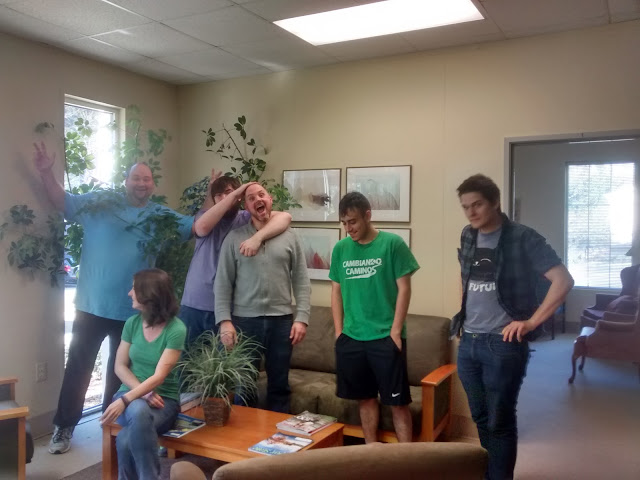 You may have also noticed a preponderance of "Seen" and "Heard" coming from the team. Early on in the project I deemed it necessary that every member reply to every email...and if they did not have time to reply they needed to at least send me an email that said, "Seen." This bit of weirdness has stuck with us throughout the project and then morphed into, "Heard." (Sometimes we would mix it up and ask the team to reply with their favorite onomatopoeia.) During stressful days when everyone was giving rapid instructions, a well placed, "heard" has often made transitions smoother, tools get into the right hands quicker and safety first-er.

The best part is that, while some of this evolved out of Jimmy just being Jimmy, a lot of it came from two games that Jimmy had us play for team building; Space Team and Keep Talking and Nobody Explodes.

Space Team is a game played on your cell phone where everyone is trying to pilot a spaceship that keeps breaking down. Wormholes are encountered, slime covers your screen and your job is to yell out things like, "Jam the flux capacitor! Plunge all toilets!" until someone does that thing. It can get pretty intense. We're awesome at it, as you might imagine.

Keep Talking and Nobody Explodes has the team diffusing a bomb remotely while one person is sitting in front of the bomb...generally under the table...somewhat patiently explaining a series of puzzles. The team has a manual that helps them solve the puzzles....hopefully before the bomb goes off.


During the end of the project Dan started cracking us up by repeating whatever goofy thing was just blurted out.

If the team has any favorite quotes as heard by Dan, I'd love it if you'd share them in the comments.